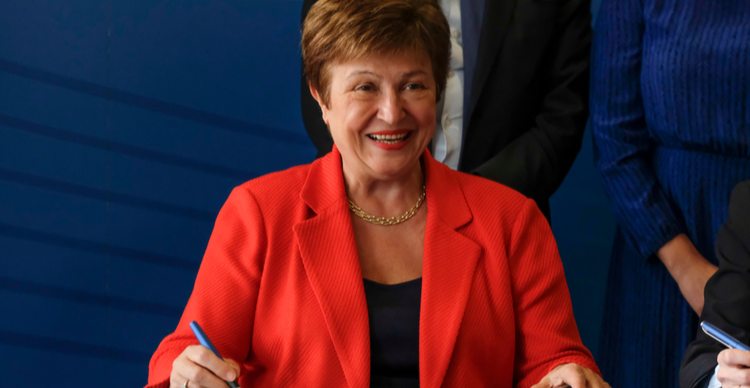 Speaking during a virtual conference in Italy’s Bocconi University yesterday, IMF managing director Kristalina Georgieva said that over 100 countries worldwide were at some stage of developing a Central Bank Digital Currency, even though they faced the major challenge of assuring interoperability of those assets.

“We did a survey of our membership, and it was very impressive: 110 countries are at some stage of looking into CBDCs,” she said

Lauding the impact that CBDCs have had on making money transfer much easier and less costly, she picked them out as the most dependable digital asset considering that they are compliant with regulations and government backed.

The IMF executive was also of the opinion that stablecoins perfectly catered to the void in privately issued money. Her remarks on Bitcoin and other crypto were, however, in stark contrast. She averred that the digital assets could not represent money, given that they lacked the backing needed to stabilise their value.

She reiterated what she said in a conversation with John Rolle, Governor of The Central Bank of the Bahamas, back in July. The Bahamas recently became the first country to launch a CBDC — the Sand dollar.

Georgieva said policymakers considered it important for digital currencies to serve as a means of exchange trusted by the public. She added that digital currencies should contribute to economic stability, and an understanding of how they slot into international regulatory frameworks, for instance the Bank for International Settlements, was necessary.

“It is very impressive how much the international community, the central banks, institutions like ours are now actively engaged to make sure that in this fast-moving world of digitalisation, money is a source of confidence and helps the economy function rather than (being) a risk.”

In the July interview with Rolle, Georgieva had explained that Bitcoin needed to be broadly accepted first before it could be a currency. She censured El Salvador’s Bitcoin decision due to the coin’s volatility which she felt would affect tax collection, financial planning and the pricing of goods and services, not to forget its high energy use.

“How do we justify highly energy-intensive mining of something, for which there are much better, stable, and reliable substitutes?”

Not long ago, the IMF asked developing economies to consider the possibility of issuing a CBDC as a path towards achieving financial stability. In a report that cited impressive returns, reduced costs and increased transaction speed as the primary drivers towards crypto adoption, the IMF said CBDCs would help navigate the risks associated with the heightened global adoption of crypto.